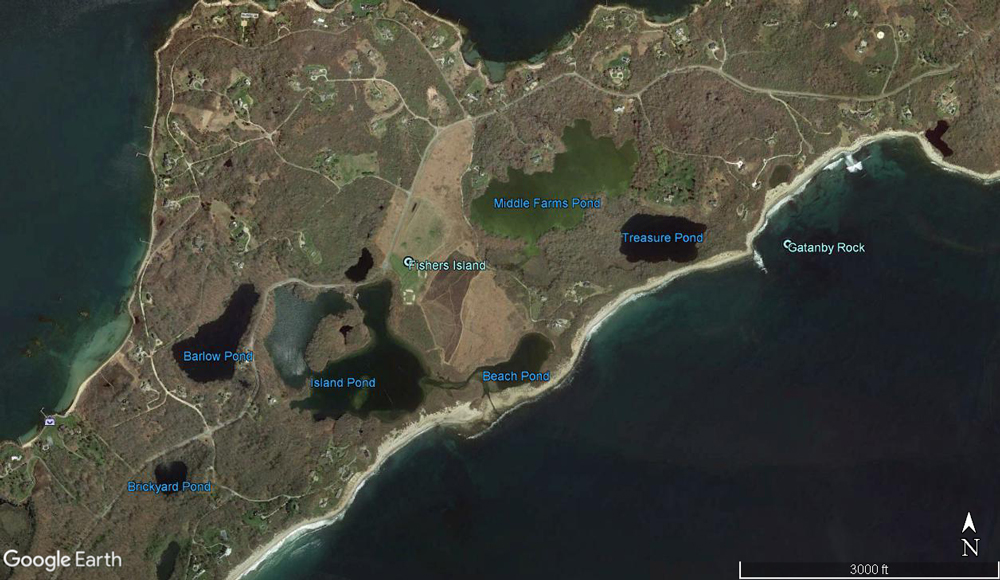 By Professor Pete Raymond
Yale School of Forestry and Environmental Studies
peter.raymond@yale.edu
May 22, 2019

Clean and sufficient water is an important part of any community’s well-being. As stated in the Fishers Island Watershed Protection Standards set by the Suffolk County Health Department, our community relies on “an interrelated fragile system of ground and surface water sources for public water supply.” Currently, we rely on a mixture of groundwater from wells and surface water from Barlow Pond. The ponds, in particular, Middle Farms Pond, are also connected to the groundwater we rely on. That is, water from the ponds flows directly into the groundwater aquifers that are used by our community.

Historically, the Island started by consuming untreated surface water. In the early 1900s water was sourced from Barlow Pond and into a distribution system without any treatment. In the 1920s a water treatment facility was built and a number of the other Island ponds, including Middle Farms, were connected to Barlow in order to augment Barlow during times of water shortage. In the 1960s two groundwater wells were placed in the Middle Farm Flats to the west of Middle Farms pond, with additional wells and a groundwater treatment facility added in the 1980s. Currently, via the new well filtration plant, the groundwater wells provide water to the Island year round. Reserve capacity can be provided with treated surface pond water from Barlow.

In 2016 the Northeast was hit with a major drought. During the drought, I had an active project on the Connecticut River and many of the streams of Connecticut witnessed their lowest flow in 80 years of record. This was a historic one hundred year drought. The Water Company saw signs of an algal bloom at Middle Farms Pond. In fact, the algal bloom could be seen by space from a May aerial from Google Earth. Due to the bloom, the Water Company restricted recreational use of the pond and asked me to do a preliminary evaluation of Middle Farms Pond. During the summer of 2018, I deployed an instrument, and with help from the Water Company took water samples for a number of months. I also reviewed the information made available to me from past measurements and studies. My more detailed preliminary report can be found here: https://doi.org/10.6084/m9.figshare.8168042.

During 2018 there were no indications that Middle Farms was in, or near, bloom conditions. Oxygen and nutrient measurements were not consistent with an algal bloom, nor was the pond visually impacted as it was in 2016. My initial assessment, informed from some depth profiles of oxygen, is there is likely a large amount of organic matter, with its associated nutrients stored in the sediments of Middle Farms. This organic matter has probably accrued slowly over the past decades due to inputs of nutrients from the human activities in the watershed and with rainfall. During the summer, as water temperatures warm, this organic matter is decomposed by natural communities of bacteria and the nutrient associated with the organic matter are released. Since Middle Farms is shallow it does not thermally stratify like many deeper lakes, and these nutrients can easily and quickly diffuse into the surface waters where they support summer algal growth. During most years it appears this growth is moderate. During drought conditions, however, the water temperatures of the pond become higher due to a lower lake volume and increased sunlight. This likely leads to greater organic matter decomposition and better conditions for algal growth. Furthermore, droughts are also associated with optimal sunlight due to less frequent cloud cover that can also stimulate aquatic plant growth.

In addition to warmer water temperatures and more sunlight that stimulate algal growth from nutrients stored in the lake sediments, algal growth can be stimulated by other factors. Other potential sources of nutrients to the pond include bird waste, fertilizer and septic input from properties within the watershed, and atmospheric deposition. Furthermore, any other processes that alter the water balance of the pond and lead to low summer water levels will exacerbate the problem. Fortunately, the low level of recreational swimming does not likely have any significant impact on lake nutrient concentrations or volume.

The ponds of Fishers are an asset. They are an integral component of our water resources. They are also unique ecosystems, offering great habitat for aquatic, terrestrial and even marine organisms. As others have noted, however, the ponds of Fishers Island are also fragile. As part of my recommendations, which are expanded in the online preliminary report, I urge the Water Company to continue to understand how these ponds function, and to work with the Fishers Island community to ensure that the ponds will have an adequate amount of clean water to support the community and the organisms that rely on them.