Tuesday morning, October 30, 2018, the day after the tornado, NOAA’s National Weather Investigators arrived from Montauk via Coast Guard transport to Silver Eel to do an onsite investigation. NWS Meteorologist In Charge (MIC) I. Ross Dickman with his colleague General Forecaster David Stark and Suffolk County Office of Emergency Management’s Ed Schneyer and Joe Trzepizur were greeted by Trooper John Havens and FishersIsland.net Editor Jane Ahrens and shown the damaged areas in order of the tornado’s most probable path. Along the way the visitors had a chance to see the property and tree damage, visit with 1st responders and residents, and collect storm data.

The attached report from NOAA’s National Weather Investigators who traced the path on Island Tuesday morning is a preliminary release along with a map and a movie of pictures from the survey team.
NOAA-NWS Tornado Preliminary Report 30OCT18

Click any image below to see a larger version.

This October 29, 2018 tornado is believed to be the 1st tornado on Fishers Island, and yes, certainly it is the 1st in October, but is it the 1st ever recorded? HLF Museum Director Pierce Rafferty uncovered this report in The Day, Wednesday 6 July 1881

A TORNADO ON FISHER’S ISLAND
THE DAY, Wednesday 6 July 1881:

Later accounts of Monday’s storm, some phases of which have already been mentioned in The Day, show it to have been in some localities a perfect tornado. An eye-witness of the storm and its effects on the eastern end of Fisher’s Island, at the farm leased by Messrs. Charles and Starr Chester, says he was reminded of descriptions he had read of the monsoon so dreaded by the inhabitants of the tropics, and which dictate even the architecture of those countries. At a little after two o’clock in the afternoon, the typical black cloud with which Captain Mayne Reid’s admirers are familiar came up from the direction of Stonington, and soon after burst with an intense fury over the farm of the Chester’s.1 The farm hands were in the barn engaged in shearing sheep at the time, from which occupation they desisted to devote their attention to holding on their own hair. The building rocked and creaked and the occupants feared every moment that it would be blown down or go sailing up into the air to become an annex to the comet, which appearance was no more sudden or unexpected than this hurricane. Its severity was too great to be maintained for a great while, even by the elder Boreas.2

Probably not more than fifteen minutes elapsed from the commencement to the end of this first, and it is to be hoped the last, appearance of the favorite tropical tragedian. No recorded equal of the blow exists excepting perhaps the famous September gale of 1815, which but few can remember, so that no comparison need be feared. The noise was likened to all the railroad trains in the country, with all the whistles blowing and rolling over the old-fashioned tracks with short rails, half an inch apart.

After the storm had ceased, the fields around were whitened as by a snow storm, but on closer inspection were found to be covered with cubes of broken ice and hail, many of which are said to have been half the size of a hen’s egg.

In places where the hail had worked down beside the road, it lay in heaps, almost cartloads, and looked like Turk’s Island salt. The damage done to the crops of the Messrs. Chester was considerable in value. The corn was laid flat, potato-vines were stripped, and general desolation lay around for a radius of a quarter of a mile. A mile away laborers reported only a few drops of rain, the area covered by the storm not probably exceeding half a mile square. At the west end of the island no unusual amount of rain fell, nor was the wind noticeably high, but the water in Great Hay Harbor was piled up about three feet higher than ordinary tides.3

1. Captain Thomas Mayne Reid (1818-1883). Successful author of popular dime novels for boys, including Boy Slaves, The Boy Tar, and The Young Voyageurs.
2. “Greek god of the North Wind and son of Astraeus and Eos. Boreas lived in the extreme north of either Thrace or Scythia and was considered the most violent of all the winds.” (Source: Dictionary of Mythology)
3. Great Hay Harbor was another name for today’s West Harbor.
A FISHERSISLANDREADER

Note: The tornado story was published in the first week of the paper’s existence! The Day was founded in July 1881.

Thanks for passing on this great historical record. Although the record has been described in great detail, it is difficult to know whether this is a tornado or another meteorological phenomenon that resembles one. For example, it could have been a Microburst/ straight-lined winds that occurred (which could be perceived (by the people in this time) as an event as bad as a tornado). Microbursts are a little more common and are often confused with tornadic events since the impacts are similar. See https://www.weather.gov/bmx/outreach_microbursts for more details.

However, it’s great to know that events like this are being documented and archived for future generations.  In terms of the official record, I have been able to verify that in terms of the modern historical record which only dates back to 1950, there have been no “recorded” tornadoes on the island.

October 29, 2018
Everyone is safe and doing OK. The (now confirmed) tornado came in at Wilderness Point (the roundhouse sustained damage – glass and siding) and traveled east between houses toward Isabella’s parking lot, taking down numerous trees and twisting a small shed and garage door, across FI Club housing’s front yard adjacent to the driving range, through the FIDCO storage area overturning a shed, and left just to the south of the 2nd house on Clay Point Road.

The Fishers Island Utility Company turned off power to the East End about 8:00 am and returned it to all but 1 house about 4:00 pm. 3 telephone poles were repaired and will be replaced in the next few days on the main road near the Water Company plant.

The west end, except for the Gate House to Hedge St. vicinity, never lost electricity.

No one was hurt and no houses hit. Some boats are damaged that were in the track. Carl Scroxton’s video from the Fishers Island ferry follows.

The weather forecast was for a nice calm day. Many were woken with the high winds. In talking with residents after realizing what had happened it became clear that the crazy wind Aaron Rice had driven through was part of the event and the roar Jimmy Wall heard behind him from the Gate House was the tornado going east. When it was over it turned back into a mild sunny day which allowed the usual Fishers approach of “all hands on deck” to get everything back to to working order.

“…The Suffolk County Police Department performed a flyover of Fishers Island Monday to assess the damage and has been in contact with the Town of Southold, said town spokeswoman Marykate Guilfoyle.

While October tornadoes are rare on Long Island, this was the second twister to hit a Suffolk community this month. On Oct. 4, a tornado with winds of up to 85 mph hit a Ronkonkoma neighborhood, taking down dozens of trees.” ~ Newsday

The Fishers Island Fire Department and Suffolk County Office of Emergency Management reported numerous trees and power lines down across Fishers Island. In addition, small buildings were removed off their foundations. There were numerous power outages across the island and numerous boats were tossed around near the water. National Weather Service dual-pol radar confirms a waterspout moved onshore across the island shortly after 7:30 am becoming a tornado, before moving back offshore as a waterspout.

This is a preliminary tornado survey report for Fishers Island. A more detailed report will be issued tomorrow after the National Weather Service conducts an on site investigation in collaboration with Suffolk County Office of Emergency Management and other local officials.text here 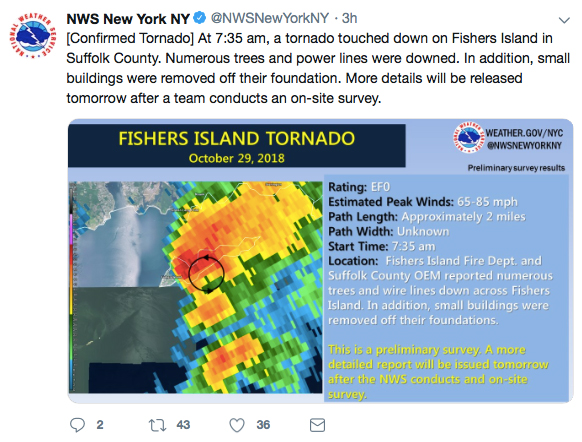 Brian Faulkner’s video of the waterspout from the water which was picked up on WPRI’s twitter feed: https://www.trendsmap.com/twitter/tweet/1056973217506738176

We just wanted to touch base with everyone who might be hearing about the tornado on Fishers Island today.

We did have a tornado touch down on the east end of the island this morning prior to the ferry arriving.

ALL OF OUR STUDENTS ARE SAFE and the school grounds were unaffected.

There was some damage to power lines and a constructions site on the east end, away from the school, but everyone on the island has been reported safe.