Controlled Burns: Life from the ashes 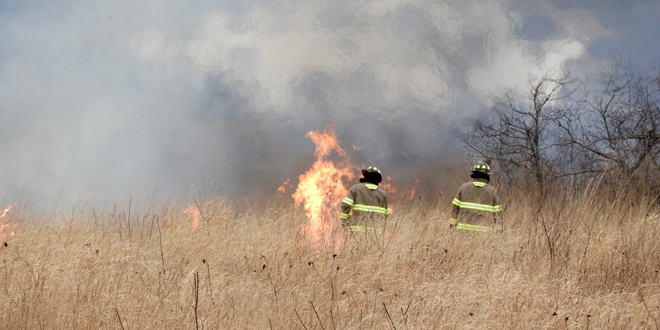 It was a charcoal gray day in mid-April, and despite the cold, a steady southwest breeze had reared its head, carrying on its back the scent of spring across the island. Peepers were chirping away in the wetlands, birds flitted between branch and ground looking for food, and a few lazy flies began to rise up from the forest floor to meander in the sparse sunlight. I had been walking down by the ferry when I first smelled smoke, and it immediately struck my nose as foreign. It didn’t have that same wet quality that comes from wood in a fireplace, but instead smelled hot and dry, like burning brush, and as I rounded the corner by the school, I witnessed the source. Off in the parade grounds, flanked by fire trucks and men in neon firefighting fatigues, a controlled burn was sweeping through the grass, sending large plumes of dark smoke skyward. Despite the commotion, the only sound was the distant pop of wood and leaves as the flames crept across the field. This sight is a common one each spring, as the Fishers Island Conservancy employs the help of the fire station to light controlled burns in the parade grounds.

Controlled burns always fascinated me. The spectacle alone is always magnificent, but unfortunately, many people misinterpret their purpose. While setting fire to dry grass in a field so close to people’s homes may seem downright stupid, this practice has a long history and an important role in keeping any ecosystem healthy. Before the arrival of man, the fire cycle was a natural element in the process of growth and decay in many ecosystems. Grasslands would grow to low shrubs, to young forests, to old forests, to forests cluttered with fallen trees and natural tinder, then lightening would strike and a fire would be lit, the forest would burn, and you’d start back at the beginning with grassland. When man finally did arrive, this process was still in full swing and out of our control, but it wasn’t long until we discovered its benefit.

Some of the first people to utilize controlled burns were indigenous populations in America, who understood their importance long before we arrived in this country. In fact, there are accounts as far back as the 17th century from Dutch traders moving up the Hudson who reported towering columns of smoke lining the riverbanks. For the Native Americans in New England and beyond, burning was used as a means to control hunting grounds. Grasslands and the low shrubs that flanked their borders was ideal space for holding large game such as deer, which would patrol these areas in search of food and shelter. By maintaining the grassland, Native Americans were able to keep a reliable food source within their reach.

Today, controlled burns are used much differently, but their effect on wildlife and vegetation is still just as significant. On Fishers, burns are done for a few reasons. The first is in order to deter the growth of forests and the settling of invasive species. If the grasslands were left by themselves for too long invasive species, like Norway maple and European honeysuckle, and other woody plants that are native like sumac and cherry, would settle in eventually outcompeting the grass and dominating the habitat. This would then drive out the insects due to lack of food and habitat, which would in turn eventually drive out the birds and field mice as they would have no insects to feed on. The other reason the parade grounds are burned is to prevent it from suffocating itself. The parade grounds, which is predominately settled by warm seed grasses or “bunch grasses”, is ideal habitat for nesting ground birds, rodents such as field mice, and numerous species of native insects. However, these grasses also tend to clump up and accumulate when they die, producing “duff”, which can ultimately strangle the living grasses if there is too much of it. Controlled burns help clear out the duff and allow more space for wildlife to move and forage.

One question that comes up is whether these fires kill off wildlife. Larger mammals and adult birds can escape, while slower moving animals such as frogs, snakes, certain insects, or fledgling birds can get caught in the burn. With this in mind, complete burns are discouraged. Instead, trained firefighters will burn portions of a field or backwoods area over an extended period of time to support the survivability of local fauna. Most experts agree that the consequence of not burning at all would be much more significant to wildlife habitat.

So if you are ever on Island while a burn is taking place, take the time to go watch. Not only is it a remarkable sight, but it also ensures that the natural beauty of Fishers Island will stay intact for years to come.

Special Thanks to Joe Henderson and Doug Tallamy of the Fishers Island Conservancy for providing information on the grasslands for this article, and to the Fishers Island Fire Department and their members who help make these burns possible.