Paddle Tennis is coming to Fishers 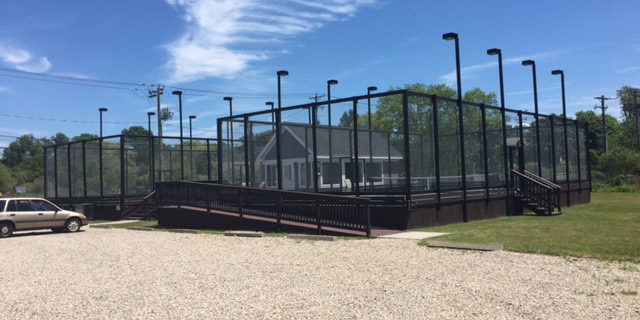 During the past year, Fishers Island Community Center members have discussed the idea of installing paddle tennis courts on Island with many in the community – all of whom have been unanimously supportive of the idea. We now want to share our thoughts and research with you, as well as what concrete steps need to be taken to help achieve the goal of having two courts installed later this year.

The FI Community Center (FICC) Board, School Principal/Superintendent Karen Goodwin, the School’s BOE, as well as the School’s Athletic Director, all support the project and believe it is a great idea. The formation of a Paddle Tennis Committee was approved at the FICC Board Meeting in October, 2015.

Why Paddle Tennis?
Paddle (or Platform) Tennis is an outdoor sport that can be enjoyed all year long. As one of the best-kept secrets in the world, “paddle”, as many loyal enthusiasts affectionately call it, is a sports program that is growing each year. Paddle can appeal to any group of people and, similar to tennis or golf, is considered a sport of a lifetime because it can be learned quickly and easily by all ages and abilities. It allows players to exercise, breathe in the fresh air and get rid of a little cabin fever in the winter without having to travel very far.

What Exactly is Paddle Tennis?
“It is played outdoors on an elevated court about half the size of a tennis court. It is primarily a doubles game and is scored and played similar to tennis, except shots can be played off the wire screens that surround the court. You don’t have to be fast or tall or come from a racquet’s background to be good at paddle tennis, which is the primary reason the sport is so inviting to play. Simply getting and keeping the ball in play are what make you successful in platform tennis at all levels – bridging the gap among the elite, the intermediate and the beginner players – something many sports can’t claim. Players also gravitate toward paddle because it’s not as physical as tennis, yet is still a good workout because you’re always moving. What’s more, platform has captured avid golfers because it doesn’t interfere with their summer sport, and it satisfies the racquet “fix” for tennis players, making the cold weather go by quickly for everyone.” (See video below.) Source: WILSON SPORTING GOODS AND THE WINTER WARRIORS

Paddle Tennis will particularly be a great off-season activity and used by many on island as well as our weekend visitors. The FI Paddle Committee is planning some fun round robins and ladder tournaments and possibly a league that can play others from off island. Additionally, the Fishers Island School is already planning to incorporate paddle tennis into the winter PE and athletic programs.

The Paddle Tennis Committee goal is to purchase and install two new Paddle Tennis courts on a piece of property owned by the Fishers Island School District. Located next to the tennis courts across from the Community Center, two courts will fit nicely as shown in the rendering (click images to see a larger version). The courts will include LED lights for play after dusk (designed to shed light on the courts and not affect neighboring buildings), and a heated platform for snowmelt for an optimal playing surface, and handicap access. Each court is 30ft. x 60ft. and will be set on concrete pillars making them 3-4 feet above grade. During the colder months the Community Center will be used as the warming hut.

To accomplish the goal:

Fundraising will begin in earnest once we receive all the necessary approvals. We have firm commitments to date of $40,000 has been raised toward the goal of $185,000 to complete the project and provide continued maintenance. The courts will also generate income through “Paddle” memberships and usage fees.

We want to begin building momentum for this project and would like all of you to discuss this with your friends and family. Please direct any questions or comments to ficcpaddle@gmail.com or share with us the names of people who you think might be interested and would like to be added to Friends of FI Paddle. The committee welcomes help fundraising, and spreading the word.