Hello and happy spring from the Island Community Board!

Over the last year, ICB has been meeting regularly and welcoming dialogue from islanders about several critical island issues. Last fall, ICB and the Waste Management District held several successful forums to answer questions about their plans, including compost station tours to help visualize the proposed upgrades. This winter, we have delved into committee work and long-range planning.

The Finance Committee has already raised over $2000 for our operating expenses this year, and will conduct a fund drive by summer. We hope you’ll consider paying small membership dues of $10 to ICB so we can continue our work on behalf of all islanders.

Finance is working closely with the Committee on Southold Relations to conduct a tax analysis study: what services do we get for the tax monies we send to Southold? We’ve gained Town Supervisor Scott Russell’s support for this effort, and hope to capture data that we can use in a five-year plan for infrastructure improvements to the island, such as sidewalk repairs, and gaining governmental and social services, like hospice care, on Island.

The Southold Committee is pursuing grants available through Suffolk County and Southold for community development. It has also created a FAQ about the relationship between town and hamlet – it’s a living document, so please submit any other questions you have to ficommunityboard@gmail.com!

The Governance Committee is updating ICB’s by-laws, which should be ready for approval by Memorial Day, and is starting the nominating process for this summer’s elections to fill the seats of Peter Brinckerhoff (seasonal) and Nate Malinowski (year-round). We were thrilled that over 300 people voted in last summer’s elections, and hope even more will register as members to vote this year. Please contact me at mail@charlesthomasoneil.com or Dicky Riegel, chair of the Governance Committee at driegel@airstream2go.com, if you’re interested in standing for election.

Finally, the Communications and Community Development Committee has coordinated some very fruitful drop-in meetings with year-round residents, and is collecting community statistics in preparation for the return of an annual report by Columbus Day. We’ll be reaching out to island organizations to contribute reports, so we can gain a true snapshot of the island and use it help inform old and new residents or school families about life on the island!

As always, we welcome your input – written or in person – at our meetings!

The Island Community Board promotes the economic, civic and social welfare of the people of Fishers Island, New York. It carries out this purpose by serving as a forum for the discussion of issues affecting the life of the Fishers Island community at regular open meetings, by prioritizing these issues and setting annual goals, by developing action plans to address these issues and achieve these goals, and by submitting such plans to ICB Members at their Annual Meeting. 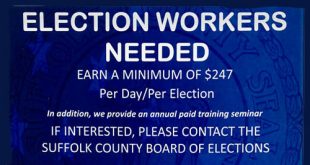 If you are interested and available, please contact us at your earliest convenience. Hourly pay has been increased! Next dates are: Primary Tuesday, August 23 & General Election Tuesday, November 2, 2022 for the mid-term election.