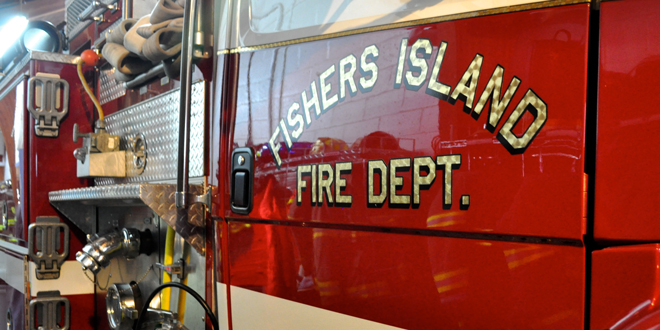 Fire District Commissioner Joe Brock recently compiled some vital statistics regarding the current members of the Fire District to share with the Island Community Board. The following is an update.

The District is also looking into the possible move to a paid fire fighter to work closely with the volunteer force. Additionally, several new volunteers may do the majority of their training on line, followed by attending a week-long certification session off island.

Founded in 1927, members work closely with Fishers Island’s year round doctor, Dr. Chris Ingram and the Island Health Project. There are 41 active volunteers currently serving (many in several roles) as department officers, firemen, pump operators, ambulance squad EMTs, and Sea Stretcher captains and navigators. Additional members serve as advisors, drivers, radio control and in other important capacities. Members serving on duty ‘in the field’, in their primary volunteer positions, break down this way for the 2015 Roster:

The District is looking for volunteers of all ages! Currently the age range is:

Life Members are those who have served for over 20 years in the department. Of the 44 Life Members, 15 are on active status.

Fishers Island is not alone in facing the challenges of a declining volunteer base. This editorial in The Day points to these – while our Fishers Island Fire District has the added challenge of isolation with no mutual aid agreement.

VOLUNTEER TODAY – THERE IS AN IMPORTANT ROLE FOR EVERYONE TO PLAY!

Learn More about the many benefits of joining at: http://www.suffolksbravest.com