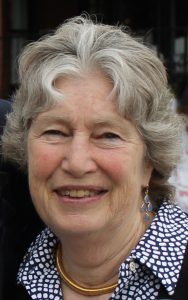 Penelope Chester Sharp of Northford, CT and Fishers Island, NY died peacefully at home on December 14 at age 76. Born and raised in Greenwich, CT, Penni attended Greenwich Country Day School, and graduated from Miss Porter’s School and Sarah Lawrence College. She earned a Master of Forest Science degree from the Yale School of Forestry. Following graduation from Yale, she served as the Director of Conservation for the Town of Wilton for ten years.

An accomplished botanist and wetland biologist, she worked until her death as a consulting biologist for many municipal and private clients in Connecticut. She held leadership positions in the Connecticut Association of Wetland Scientists, the Connecticut Botanical Society and was active with the Connecticut Invasive Plant Working Group. She was also the principal author of Trap Rock Ridges of Connecticut; Natural History & Land Use. In 2009, she was given the Connecticut State Award by the New England Wildflower Society.

On Fishers Island she served on the board of the Henry L. Ferguson Museum and its Land Trust for 28 years. As president from 2003 until her death, she was a widely respected leader who shared her considerable knowledge of the natural world with all who knew her. Penni was a dedicated volunteer and tireless advocate for the island and the protection of its environment.

An avid singer, she belonged to Cappella Cantorum and greatly enjoyed performing in the group’s concerts and travelled with them on singing tours to Spain, the Dalmatian Coast and Venice, where she sang in St. Mark’s Cathedral. Devoted mother and grandmother, she adored spending time with her son and daughter and her four beloved grandchildren. Penni was also a wonderful cook, a New York Times crossword devotee and loved walks with her Labrador.

A Memorial Service will be held on April 18, 2015 at 11:00 a.m. at the First Congregational Church in Guilford with a reception to follow at the Guilford Yacht Club.  Donations in lieu of flowers may be made to the Henry L. Ferguson Museum.